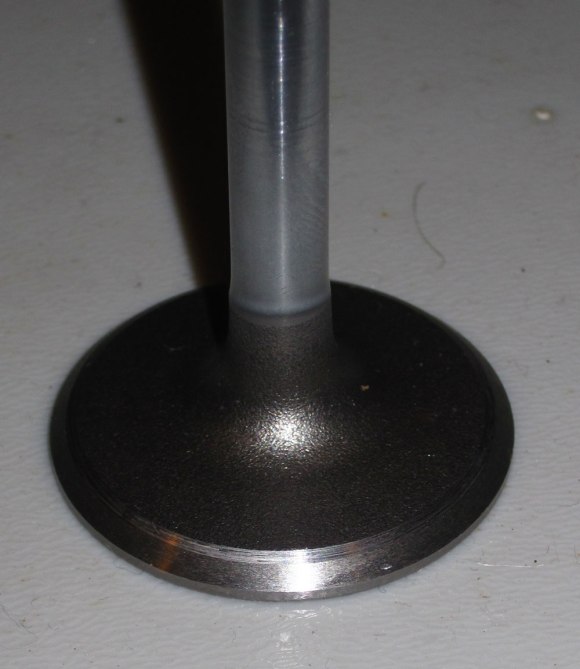 note the backcut on the valve about 2mm wide 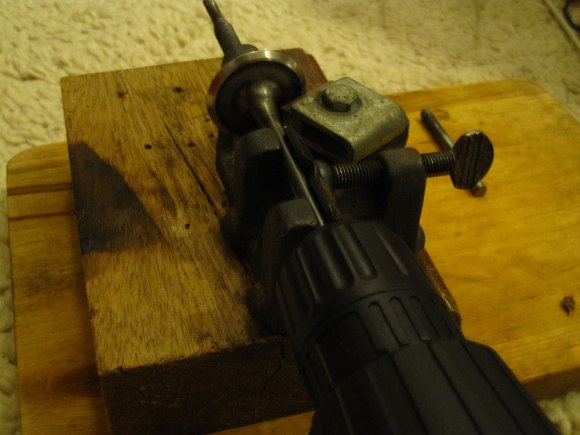 A mixture of 18th century technology and 20th century power . Crude but very effective, just the setting of the angle is very fiddly. It was still in the position I used for a head that performed remarkably well on the dyno so i left it there.

The crude contraption is not for grinding the valve seat itself ! But it works well enough for the back-cuts and it cost about $15 + P&H from somewhere in the midwest a few years back, made in the US even, using cutting edge 18 th century technology. It comes with a crank handle to spin the valve by hand.It very charming, but does not work as the cutting speed required for a decent surface finish is a lot higher than achievable by hand cranking and the clamping is fully insufficient as well. An electric drill chuck holds the valve a lot tighter and if you spin it fast enough it cuts cleanly, the finish is not even halfway bad.

Having the valves back-cut by an engineering company on a valve grinder is cost prohibitive for testing btw. I was thinking of sacrificing a bunch of old valves and having them cut on a lathe at 22 30 34and 38 degrees. so I can use them to set the angle on this thing

But does it do anything usefull?

mahoosive gains ! black is original, red is deburred, green old valve with tiny back cut and blue is valve as shown above.. this takes a 5 second machining procedure

Well.. yup. now the port needs a bit more thought as well and the seat should be fine tuned. The gains are quite substantial but after 8mm lift it hits a brick wall.